art by benjamin harubin. text and art copyright benjamin harubin. posted in no particular order, from 1976 to the present. i have the capability to print the strictly digital works up to 40" with archival materials. some restrictions may apply.
contact email is bharubin provided by gmail with a com thrown in there for good measure. and a @, too.
click on pics to giganticize. dimensions are listed in order: horizontal, vertical, depth.


People look at a rose and think
"a rose, how pretty i think i'll paint that"

And then there are those that look at the rose
as an interaction of visible photons with a surface,
a complex cloud of many frequencies,
refracted by a lens
and projected upside down in a bowl of living neurons.

And then others can consider the botanical function of a rose,
as a sex organ
(pimpin' bees,  making the money honey),
part of a tangled bank
of mutually dependent interconnections,
as part of a mating ritual of humans, (a nuptial gift).

And then, there's all of the myriad historical and personal associations,
(higher order cerebral cortex clusters).

And then there's those who see the rose
as a metaphor-
for the dualistic nature of afferent neurons
(pleasure and pain, baby bitch).

And if you had enough electrodes inserted into individual neurons
throughout the living brain of a subject shown a rose,
then the idea that you can know a rose by any name is seen to be silly.
Better at least maybe could say a number of qubits,
that in superposition,
also represents a portrait of Abraham Lincoln,
a classic Singer 66
and protein information ports floating in a cell membrane
simultaneously and shit on an operating table.


the title is in part a part of a series of perfectly good Picasso quotes, trashed.

here you can see the arc of the canvas
(click for bigness): 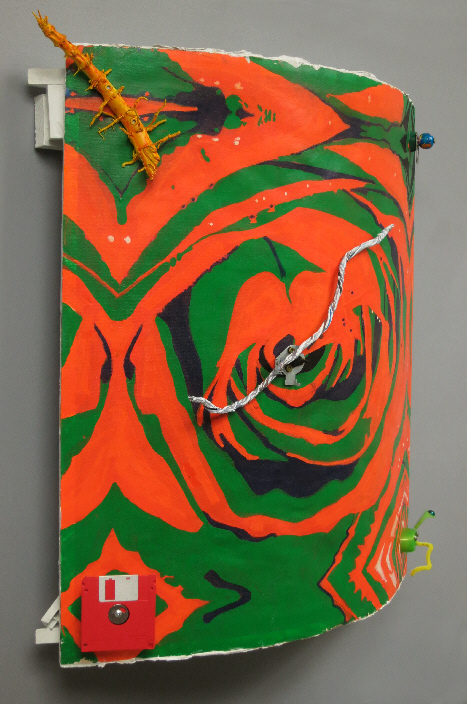 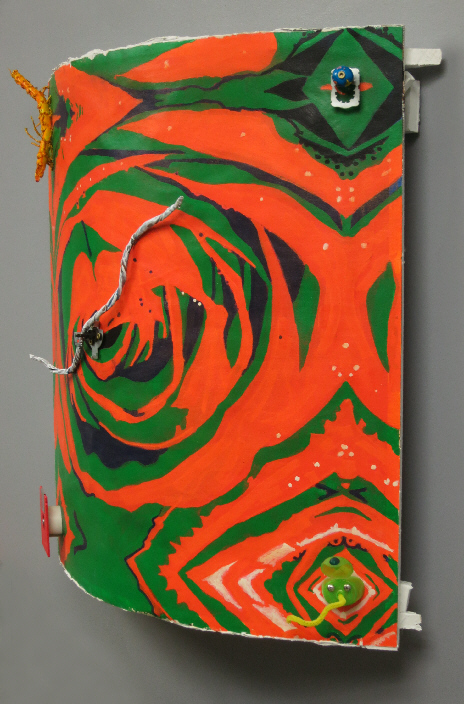 No comments:
Email ThisBlogThis!Share to TwitterShare to FacebookShare to Pinterest

Each figure is depicted in a disconcerting confrontational manner and none are conventionally human. The beings appear as slightly menacing and rendered with angular and distorted body shapes. One is shown with an African mask-like face and three more with faces in the Infantile style of Harubin's native Long Island, giving them a savage aura. In this adaptation of Surrealism and abandonment of perspective in favor of a flat, two-dimensional picture plane, Harubin makes a radical departure from traditional Modern painting. The Post Apocalyptic work is widely considered to be seminal in the early development of both the New Synthesis and Post- Post Apocalyptic art. Demonzoids was revolutionary and controversial, and led to wide anger and disagreement, even amongst his closest associates and friends...

No comments:
Email ThisBlogThis!Share to TwitterShare to FacebookShare to Pinterest

Prototype for a Neurochemical Re-Architecturality


it is not my intention to engage in obscurantism for its own sake.

on the other hand, if it were possible for creators of music, poetry, painting and other less than "rational" art forms to express themselves explicitly in terms that make sense to the linear, verbal mind, they would do so, and save themselves shitloads of trouble.

on the third hand (the blue one), i don't think that exegesis is actually harmful to a work of art, so i may briefly engage in some, with the proviso that you understand that it is less than foam upon the waves.
everything is in context anyway.

this piece can therefore be seen as a kind of microcosm; a model of chaotic interactions, reminiscent of random thoughts.
for me, it is less about a specific gestalt of meaning than about this process of finding and creating meaning in a neural architecture.

whereas Modernism is sometimes seen as destructive and reductionist, there is another coexisting pillar which is an unbridled celebration of endless new possibility.
for increased possibilities to exist requires a continuing understanding of the processes and context of being human.


this is the task of the post- post-modern, post-apocalyptic Reintegration.


so here we have a disorienting jumble of windows rotating fiercely about the axis of attention.
ideally, the borders and connections of this work would keep extending like a demented altar piece until it is housed inside of its own post-apocalyptic temple complex and inextricably and electronically woven into world.

this piece was constructed of several separate planes, so i am including some three quarter shots and a detail.  click to sizematize. 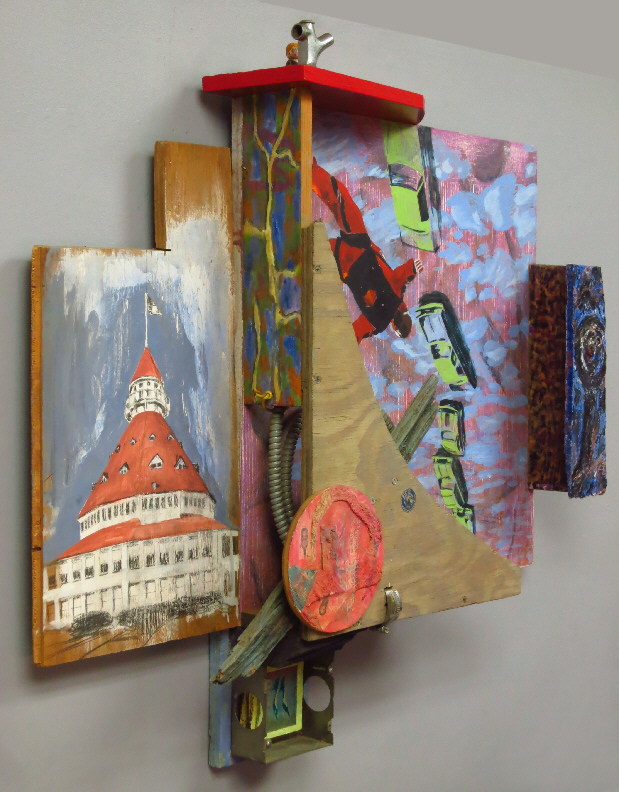 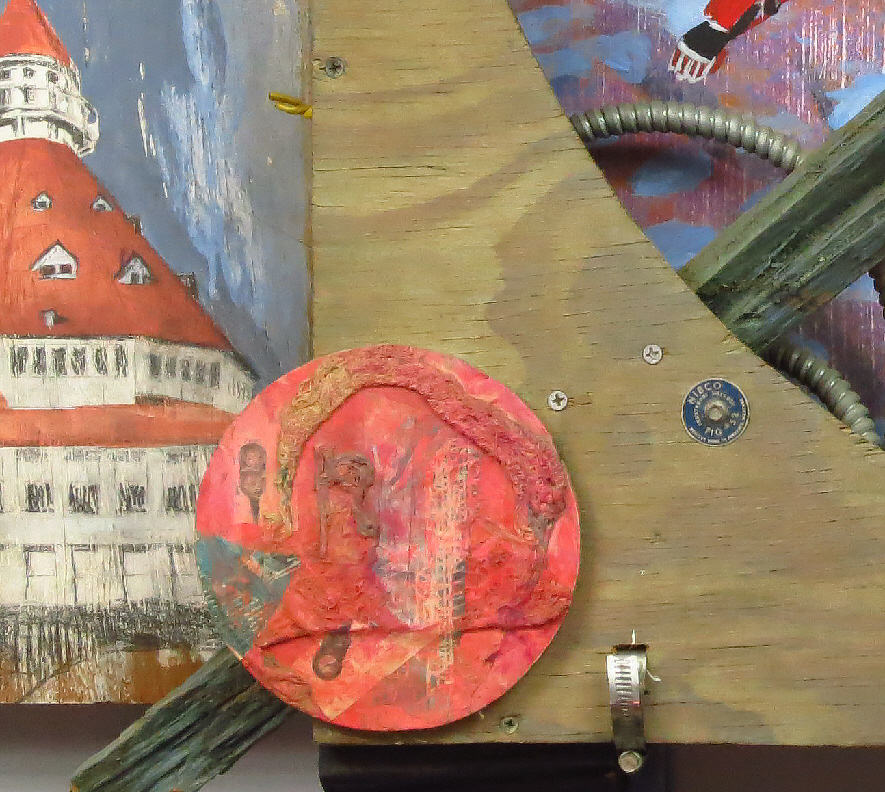 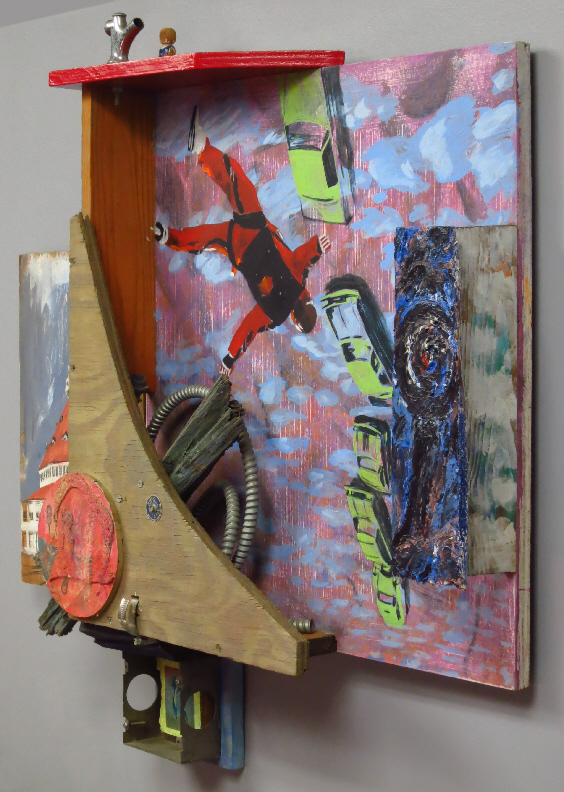 *as explained before, we can still talk about an ongoing Modernism, even after its official closing rite because tendrils of inheritance.