art by benjamin harubin. text and art copyright benjamin harubin. posted in no particular order, from 1976 to the present. i have the capability to print the strictly digital works up to 40" with archival materials. some restrictions may apply.
contact email is bharubin provided by gmail with a com thrown in there for good measure. and a @, too.
click on pics to giganticize. dimensions are listed in order: horizontal, vertical, depth.

Unlike the story of the artist chipping away at the stone, removing all that is not as he sees it, leaving the finished sculpture, I see the story of the artist more resoundingly portrayed by the  myth of Frankenstein.  This is especially and increasingly so in the present portion of the art historical timeline.  The artist digs up body parts (or hires professional thieves- art professors- to rob the graves of culture) and assembles them to create a new creature, which then has a life of it's own.  Culture is increasingly about culture (another way to say this is that culture, in it's increasing reiterativity, is becoming fuzzier, at finer and finer levels).
The spark that animates this clod-like collection of crap is, of course, the artistic impulse, but instead of "artistic vision", i.e., a pre-formed gift of the gods genuine homunculus, it's more like a neural pachinko game, i.e., a vortex of colliding memes and motifs and tropes.
What's new and unique lies in the sewing technique- the accidental (?) juxtaposition of body parts- which represents, duh,  the architecture of the individual brain, both of the human in question and also the somewhat larger individual brain of the collective brain that is increasingly interconnected via the interconnectatron.  Being personal and collective history and genetics.
It is interesting that the modern Prometheus, like the ancient one, was a thief.  The recognition that copying is a part of and indispensable for creating has emerged now that copy protection rackets are going into fascist overdrive.  Novelty is an emergent property of collections of brains emulating each other and riffing each other's wrinkles.

this plus life sized figure was conceived (however that may have happened) to be just one of a series of twelve Dancing Guardians.  It is part of a series I've had going in a larval stage for some time now: using toy lawn furniture and vehicles plus found branches and logs. 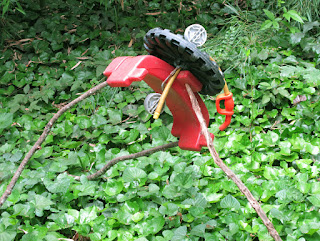 Eventually we will have fully animated versions (that can replicate themselves!) Unfortunately the project is on indefinite hold, pending  funding and a mandate from The Secret Brotherhood.  Even this (top) figure is unfinished.  Currently there are plans to install solar powered interactive light and sound elements.  Once all figures are completed they can be placed in an environment where they can interact with each other and emit sounds (have a robo concert).